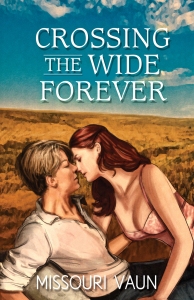 It was hard not to get lost in the research for this book. Not the technical data or anything like that, but rather the personal stories of the women that migrated west during the mid-1800s. Many of whom were white and from middle-class economic backgrounds. Slavery and massacres were prevalent during this time period and gravely impacted the lives of black and native women. Conflicts between anti-slavery and pro-slavery factions in the Kansas territory required farmers to carry firearms to the field with them. The heated debate over the extension of slavery into the territories west of Missouri were being hotly debated in Washington D.C., while in the Deep South succession was in serious discussion. A lot was going on in the 1850s. I tried to be strategic about where I placed this story because of that.

I hadn’t realized until I started this book how many first-person diaries were available. Many of the story details that might seem far-fetched, like the electrical storm on the plains, or the ghoulish skulls of long dead buffalo, are taken from first-person accounts. The women who made the journey west didn’t so much write about how they felt, maybe they kept those feelings private, but they did describe the day-to-day challenges of managing a traveling home (wagon) on the open prairie.

I also didn’t realize how many white women dressed as men to migrate west. I had this idea that one of the characters in Crossing the Wide Forever might disguise herself as male but I wasn’t sure how plausible that was. It turns out there were lots of reasons for white women to disguise themselves as men. Some were fleeing abusive relationships or hoping to avoid an unwanted marriage arrangement. Some found themselves in situations where they had to feed and care for their children alone. Many white women during this time had two options, get married or resort to prostitution. The third, more radical option was to dress as a man and find work. Only men had the luxury of finding decent paying jobs on the frontier. In many cases free black men and white men worked side-by-side.

One of my sources for the historical setting of Crossing the Wide Forever was a book by Peter Boag titled, Re-Dressing America’s Frontier Past. Boag’s book contains stories of both men and women who cross-dressed. I can only assume that some women also cross dressed so that they could marry the woman they loved, as many of them did. Sex was not viewed as binary at the time and there was no real word for homosexuality so newspaper stories about these cross-dressing women rarely made any mention of sexual orientation or the role that may have played in the woman’s decision to dress in masculine clothing. Sometimes the undertaker was the only one to discover the true identity of many of these women when he prepared their body for burial.

Winslow Homer’s work as a watercolorist during the mid-1800s provided some of the basis for Lillie’s career path as a landscape painter in Crossing the Wide Forever. Lillie’s experiences as a woman in the male-dominated field of art were inspired by Georgia O’Keeffe’s early life. O’Keeffe overcame many obstacles to succeed as a painter. Some of what she had to say about art critics and how they interpreted her work through a misogynistic lens is heartening to read, especially if you’ve ever received a bad review.

This novel is not intended as a history lesson and it was my goal not to let historical detail bog down the story. But context is important. All of the research was simply to put the reader in Cody and Lillie’s world. The story is about adventure, about charting your own course, about believing in yourself, and ultimately about falling in love.

2 thoughts on “My New Release: Crossing the Wide Forever”