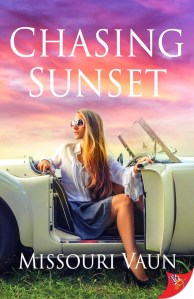 In honor of the release day of Chasing Sunset, my “sexy rom-com road trip,” (thanks Bold Strokes Books) I thought I’d share its backstory.

People ask me sometimes, where do you get your ideas? Most of the time I have no idea. It’s just this magical thing that happens, usually in the shower when I have nothing to write on, or when I’m driving to work. But in this case, I remember the exact place the idea for Chasing Sunset happened. I shared this bit of backstory in the acknowledgments for the book, but for those of you who haven’t yet read it, here goes…

I was sitting at the base of the Eiffel Tower (not the one in Paris, the one in Vegas). A group of us were having drinks near Paris Las Vegas one night during the annual Golden Crown Literary Society convention. There were no novels in the pipeline for me so I turned to my friend and beta reader, Jenny Harmon, and asked her what I should write about next? Jenny immediately responded with a road trip romance. I thought this was a terrific suggestion. Thank you, Jenny!

I’ve had a long love affair with road trips and cars. My grandfather taught me to drive a stick shift long before I was old enough (or tall enough) to see over the steering wheel. But I loved cars even before that. For my seventh birthday I asked for tickets to the Talladega 500. (I’m not making that up.) Back then NASCAR wasn’t quite so mainstream, but there were stock car, dirt-track drivers in my family so I grew up a fan. 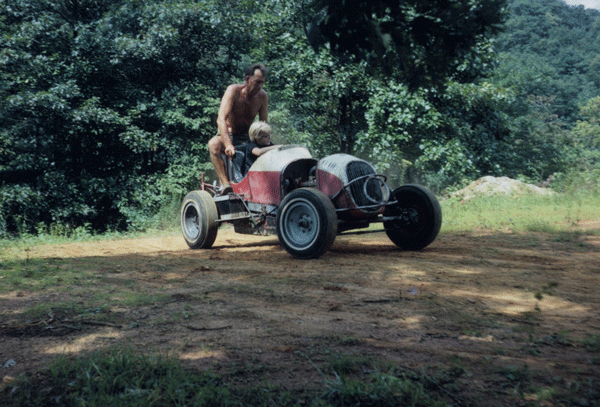 My grandfather coaching me while I’m driving a midget racer on a dirt track in Georgia. I think I was probably 9, maybe 10.

But I’m getting off track, pun intended.

Chasing Sunset combines my love of cross-country drives and my belief in fate. I hope you enjoy the ride. Here’s more about the book:

Taylor Finn aspired to be a stunt driver, but driving a limo was what paid the bills. When she finds herself chauffeuring a drunk guy harassing his date, she leaves him stranded and is sure she’s going to get fired. Maybe it’s finally time to pursue her dream.

Iris Fleming’s flight to Atlanta was a scene from a disaster movie, the scariest landing ever. She’d desperately wanted a part on a new sci-fi series, until the director made a pass at her. Now Iris doesn’t want the role and has no intention of getting back on a plane.

Making their escape from Atlanta, Iris and Finn end up at Hideaway Haven, in neighboring cabins. Iris isn’t sure what’s scarier, sexy Taylor Finn or woodland nighttime noises. But maybe they can help each other out. There are schools for stunt drivers in L.A. and Iris needs a ride. Wrong turns, and roadside hijinks ensue as Iris and Finn set off on a road trip, chasing the sunset, and falling for each other along the way.