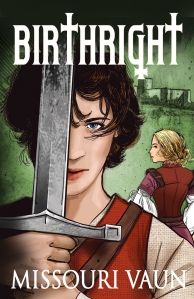 Birthright: where queendoms and swordswomen reign. Will Princess Kathryn and Swordwoman Aiden save their queendoms… and find love?

When her spies bring news that a swordswoman imprisoned in a neighboring kingdom bears the Royal mark, Princess Kathryn sets out to rescue Aiden, the woman she’s sure is the true heir to the Belstaff throne and the solution to a tyrant’s campaign to overrun her small queendom of Olmstead.

That solution, however, is more of a problem. Too footloose for responsibility and distrustful of Kathryn’s selfless moral code, Aiden is a resistant heir. Her only interests are freedom and adventure. Despite their differences, Kathryn and Aiden discover common ground and a growing attraction as they set out on their mission to defeat the ruthless rogue ruler of Belstaff.

The true test lies ahead, when they find they must free their hearts to finally liberate their queendoms.

“…I found ‘Birthright’ to be a thoroughly well-done, fairy tale like offering, with impassioned warrioresses and an old-fashioned love story in which affection for another woman is an accepted facet of reality. I welcome escapes such as this … Further, Aiden was just slightly irresistible.” — Adrian Amador

“A story set in the middle ages, Aiden, the orphan from a monastery reaches her 21st and sets out to experience the word. Unknown to her, she is the daughter of the House of Roth, the royal family of Belstaff. Queen Katherine, of the kingdom of Olmstead, sets out to find this hidden heir to the Belstaff throne in hopes to depose the tyrant leader, Balak. I liked this story immensely. It was well written, filled with action, had well rounded and likable characters and flowed along at a nice pace. Like many of the lesbian hero stories that have been coming out lately, it does have the ‘everyone is ok with strong women–who happen to be lesbians– and no one bats at eye any of it’, but that’s a nice thing to envision in current times. Solid and fun read.” — Mary Hitchcock