Music always plays an important part in my writing process. Sometimes, if a book is set in a particular era, I’ll build custom playlists from that period. This past week, I got a new phone and when the device synced with my car the first song that came up was “Moonlight Serenade.” This was part of the ’30s playlist I created when I was working on Whiskey Sunrise. Simply hearing that song took me right back to the story… and the characters… I love music for its ability to make time travel possible.

The two main characters are Royal Duval and Lovey Porter. Royal is a moonshine runner and Lovey is the daughter of a conservative Southern minister. Hearing “Moonlight Serenade” made me want to share a small sample from Whiskey Sunrise: 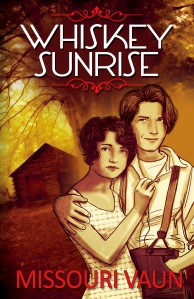 “As Royal caressed her with the lightest of touches, Lovey visualized herself in the Garden, naked before God. She was standing under the tree of knowledge, looking up into its laden branches, and she knew with certainty the only fruit she wanted to taste was Royal. She wanted to taste the sweetness of it on her tongue, feel the weight of it in her hand. As Royal traced the outside edge of her arm with tender fingertips, Lovey was struck full in the chest by the knowledge that the one forbidden thing was the one thing she desired most.”